We thought we arose earlier than usual but ended up moving so slowly that we had to purchase a $21 breakfast at Huddle House – one that we could have had free at the Hampton.  It really wasn’t a problem as we walked across the parking lot to Huddle’s and the fare was much better than the Hampton.    Mary got the Western Omelet and saved half of it for dinner.  I copied my usual New Beginnings Restaurant breakfast in Grand Rapids.  It’s always hard for the cook to prepare my eggs “over hard, crispy on the edges – wreck ‘em and burn ‘em” but at least today they weren’t soupy.

This is our fourth day on the road, living out of suitcases.  Mary asked me this morning, “Why does every sentence begin with ‘Where is…’” 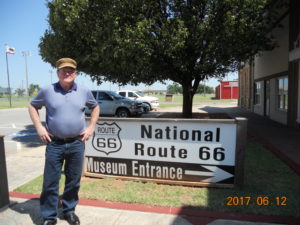 On our way out of town (the same route we followed last night searching for the Hampton), we stopped at the National Route 66 Museum.  This was a nice place!  They had an interesting movie about the development of Route 66 and the eventual demise of the businesses along the route when by-passed by I-44 and I-40.  It was unfortunate that the video and audio weren’t synched, but if you didn’t watch the person’s lips it wasn’t so disconcerting.  They had a number of smaller museums attached, not unlike Barry County’s Charlton Park near Hastings, Michigan. 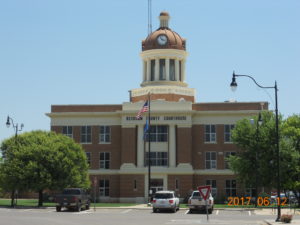 We followed the original Route 66 where possible and came upon Sayre, OK.  They have a beautifully restored courthouse used in John Ford’s 1940 “Grapes of Wrath” movie.  On the front lawn was a bull painted up in military dress uniform with sergeant’s stripes. 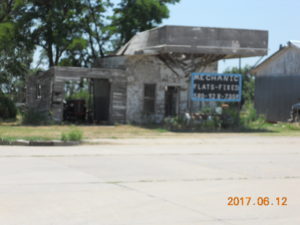 We stopped at the last city in Oklahoma, a hundred yards before the Texas border.  Advertised as a true ghost town, Texola was certainly decrepit, I’ll give it that. 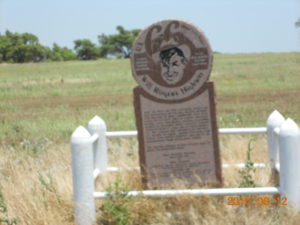 On to Shamrock, home of the U-Drop-Inn Café and a restored CONOCO gasoline station.  I recognized several foreign signatures in their guest book from yesterday’s visit to the Round Barn.  The older of the two guides told us that yesterday two Chinese tourists arrived.  The older spoke no English but his son did.  The son explained that his father’s lifelong dream was to follow Route 66.

Despite the popularity of the Route, there was a dearth of traffic.

This station sits at the “Crossroads of America” as US 83 runs from Canada to Mexico. 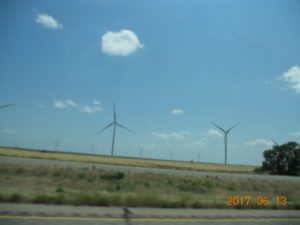 In Gray County we encountered the first wind turbines.  Over the next 50 miles? we saw them mostly on the north side of I-40.  We guesstimated that there were 1000 in view, but we could not find any real numbers after half an hour’s search on the internet this evening.  I did find news articles about “swindles,” but that’s probably because the government was heavily involved.  It’s all reminiscent of Lyndon Johnson’s friend Billie Sol Estes and his fertilizer swindle surrounding the US Department of Agriculture.  On the other hand, Mary read that during one 17-hour period, the wind generators throughout Texas produced enough electricity to power 40% of state.  They are so massive! 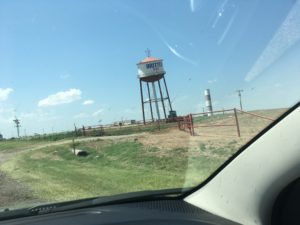 At Groom TX we photographed the “Leaning Tower of Water” which I suspect is actually empty.

Just beyond but east of Amarillo we spied half of all the cattle in the US.  OMG!  The landscape was black with steers.   Even a blind man would have known we were passing livestock!  I guessed that the distance between that feed lot and McDonald’s was about three days.  It reminded us of Sinclair Lewis’ book The Jungle.

On the west side of Amarillo, we caught a fleeting glimpse of the Cadillac Ranch – an automotive imitation of Stonehenge.  Dozens of cars, motorcycles, and people were lined against a fence marveling and taking pictures.  We would have remained on Route 66 but it often was barricaded, dirt, or simply not there.  So we followed I-40.

Our last stop in the Lone Star State was Glenrio.  Advertised as an authentic ghost town, the exit was aptly numbered zero.  This place is on the National Historical Register for reasons unknown.  It’s simply a ruin waiting for a bulldozer.  A British tourist from Bristol stopped me (yes, I was taking a picture) and cautioned against following Route 66 farther west as it was just gravel.  We returned to I-40.

We immediately crossed into New Mexico but the signage wasn’t necessary.  The landscape changed dramatically within five miles.  The FLAT treeless countryside changed to one of plateaus, mesas, and buttes with low shrubs.   Wildly different colors defined the strata on exposed rock faces.  It is SO very different from Michigan!

Into Tucumcari which once boasted 2000 motel rooms.  It is now a shell of its former glory.  But young entrepreneurs are moving in and restoring some of the motels and other sites.  They have a vision and are willing to match it with sweat equity.  Bully for them!  I wish them well.  The pearl of this effort is led by the new owners of the Blue Swallow Motel, still illuminating their world famous marquee with neon.

The travelling day ended as we turned into Santa Rosa’s Hampton Inn.

Tech calls today included Don Turnbull from near Grand Rapids, who called about the two-bobbin control box in his Midget.

Another owner called about the trouble a shop was having trying to tune his Stromberg MGB – I called the shop to find that they had not replaced the air cleaner.  A Stromberg MG will NOT run correctly without the factory air cleaner!  I told the shop owner that a fellow called me from Texas about 35 years ago complaining that his MGB wouldn’t run over 3500 rpm.  I asked him if the air cleaner was on.  The owner told me that it was still off.  “Put it on!” I told him.  “What difference will that make?” he asked.  I said, “Look, you called me.  Let me know how it works.”  He called back the next day, wild with excitement that his MGB ran well again.  “What do I owe you?” he inquired enquired.  I said, “Send me some Lone Star beer.”  About a week later I got a call from the bus station telling me they had a suitcase there addressed to me.  It was full of Lonestar!

Several enthusiasts have written “Gosh, wish I’d have known you were coming through.”   Well, I’m sorry I’ve missed you, too.  We’re on our way to Santa Barbara, so if you’re along Route 66 or I-40, let me know!  Contact info is on the website.  Sorry, I don’t have time to stop and tune your MG.