Craig Perry from Colorado suggested this new title for my blog.  Thanks Craig!

We are on sensory overload.  While much seems the same, more is so very diverse.  The huge hemispherical blue sky is always brilliant.  The landscape allows a line of sight that must be 50 miles.  The desolation and abandonment of business districts spreads out all along Route 66.   Shacks and trailers surrounded by volumes of junk give some communities the appearance of a third world nation save the air conditioning units in the windows.   Yet other communities are engaged in urban development.  Still others, not dependent on the tourist trade, are vibrant.

For miles we saw billboards for the Flying C Ranch.  If there ever was a business dependent on highway signage, this was it!  So we stopped to fill up and check out the wares.  There were moccasins, Indian jewelry, plaster Indians, plaster horses, T shirts…  THIS was souvenir haven, or so we thought.  Our guide book praised Cline’s Corners but it was unclear whether they had gasoline.

Cline’s Corners had gasoline.  They had a fifties era restaurant.  They had everything that the Flying C Ranch had, and a hundred times more.  This was TRULY souvenir heaven.  We couldn’t help ourselves and purchased homemade fudge.  Yum!

Albuquerque was the next stop.  My great-grandfather died in Albuquerque in 1904.  These high, dry communities were destinations for those with tuberculosis.  He’d come to the southwest to gain a little more time.  I knew little of the city or its early history.  As it happened, the Albuquerque Art and History Museum is hosting a display of the “Lunger” community, so we spent a couple of hours there.  Two old friends from Grand Rapids, sisters Mellisa and Hillary Ames, knew from following this blog that we would be in the area.  They drove down from Taos, NM, to meet us at the museum.   In spite of our 40+ year separation, we had no difficulty recognizing one another.  We spent a couple hours at the snack bar catching up.

Then it was off to Cubero which contains the largestConfederate cemetery in the southwest.  We were off the Garmin maps, driving on gravel roads only to find the gates closed.  But I got the picture and bragging rights.

Grants, New Mexico, was one of those communities devastated by the lack of road traffic, but they were doing their best to improve Route 66 through the city.  A beautiful median, trees along the boulevard, and revitalized motels evidenced the community’s efforts to lure new Route 66 travelers. 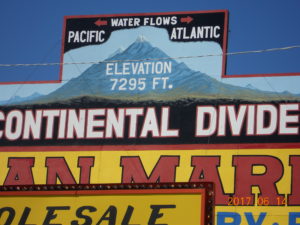 Next stop was the Continental Divide – where east meets west, at 7200 feet elevation.  We tried to get a picture of the sign on the expressway, even though we were on Route 66, but it was terribly out of focus.  This one was a lot better, anyway.

We rolled into Gallup about dinner time – WORN OUT.   How driving wears one out is a mystery as it seems all ones does is sit there and occasionally turn the steering wheel.  But by the time we got into the hotel room, everything hurt – my feet, my eyes, and my brain.  I’ve never driven this far in such a short time in my life.  Our attempts to find Route 66 in downtown Gallup in the dark with the neon signs touted in the guide book was for naught.  We got lost.  We really were on sensory overload and grateful to find our way back to the Hampton Inn without the Garmin.