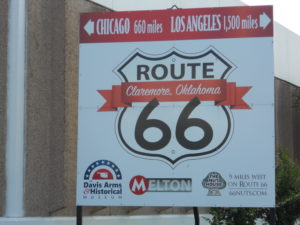 Our first stop was the J M Davis Arms & Historical Museum.  They don’t advertise that they own an example of every gun made (just most of them).  Drat.  Immediately foiled.  Open Tuesdays – Saturdays. 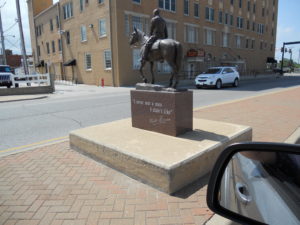 Right outside the Arms Museum was a Will Rogers monument with his famous quotation:  I never met a man I didn’t like.  That triggered a memory from my time with the 25th Infantry Division in Cu Chi, Vietnam in 1969.  There were only a few flush toilets on base.  One of those was at the headquarters where I worked as chief clerk in the offices of the G-3 (operations).  There was so much graffiti on the walls that our sergeant major affixed a whiteboard on the stall wall with requisite markers so the walls would not continue to be defaced.  One day I added my own line: “Will Rogers said he never met a man he didn’t like.  What would he have said if he were in the Army?”  The first reply was: “I never met a lifer I liked.”  And under that was penned: “Rojer that.”  The next entry was: “Fool – Roger is spelled with a ‘G’.”  And under that:  “Rojerg!”

We passed Patti Page Avenue.  Much later in the day we passed under Garth Brooks Highway. 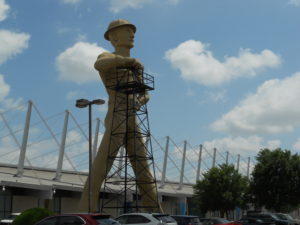 Into Tulsa to view the Golden Driller.   Then onto the Sapulpa Rock Creek Bridge – a steel truss with brick deck, built 1921. 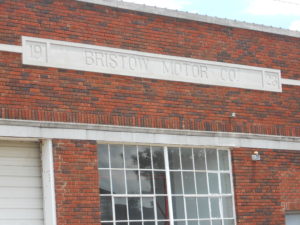 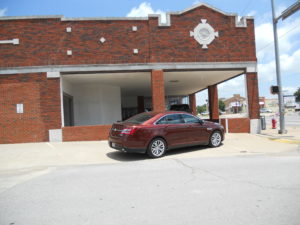 In Bristow we circled the 1920’s recently restored building of the Bristow Motor Company.   Bristow was a lively town in marked contrast to the ghost town of Depew. 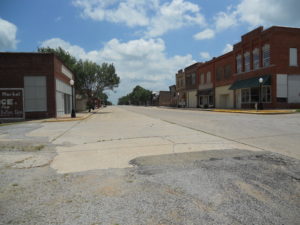 Beautiful brick buildings all lay empty save two gov’t offices which were apparently not staffed today.  Depew, with its deserted main street, was bypassed when Route 66 was rerouted about a quarter of a mile north in 1928.  It and has suffered terribly. 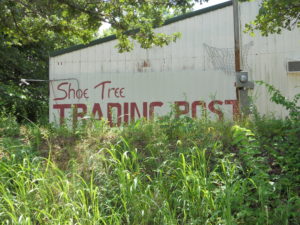 Just down Route 66 we viewed the Shoe Tree and the Shoe Tree Trading Post but there was no trading today.   Look carefully at the image on top to see dozens of shoes hanging from branches.  Mary says there’s a tree like this on US 131 up near Mancelona, MI. 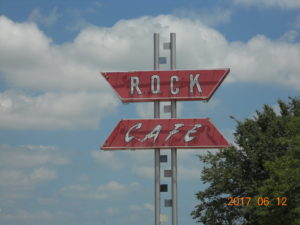 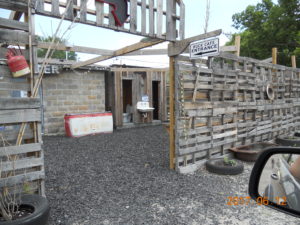 Into Stroud and the original Rock Café.  The staff was very friendly and the food very good.  The Rock Café opened in 1939 and has a throng of visitors from across the world every day.   “Rock” has no reference to music but to the rock used in construction.  Love the toilet facilities!

Posing in the Rock Cafe. 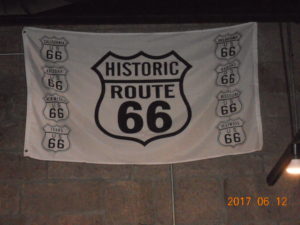 As we were exiting Chandler, we spied the Chandler Armory, a WPA project used until the ‘80s by the National Guard.  Once abondaned and nearly lost, it is now repurposed as the Route 66 Interpretive Center.  Purchased some Route 66 memorabilia.

Throughout the day I take tech calls.  As I was talking to Ross Baker from Chicago about his MGB charging circuit but also about the Episcopal Church in the USA, we came upon the 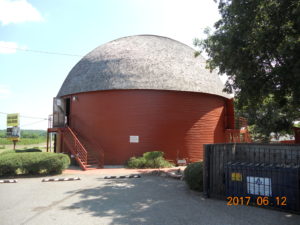 Round Barn in Arcadia.  It was built in 1898 the  to store loose hay, prior to the introduction of  baling.  We stopped here on the recommendation of Steve Hull, an MG owner who lives in Arcadia.  Steve!  We would have loved to meet up but our schedule was so uncertain.  We simply didn’t know when we’d be there. 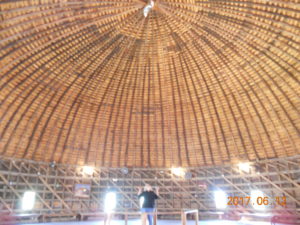 Mr Sam, just 90, entertained us and signed our Route 66 tour guide. We signed the guest register immediately below a couple whose home was in France.  Mary and I walked up the stairway and into the hayloft.  OMG!  My acrophobia took over and I had to sit down even though we were standing on a very sturdy and octagonally designed floor – that ceiling is something like 45 feet high.  My head spun and my legs weakened.  I laughed out loud the sensation was so intense!  Mary is standing in the center for perspective.  Arcadia is just east of Edmond, OK, home of the late Don Peery, MG collector. 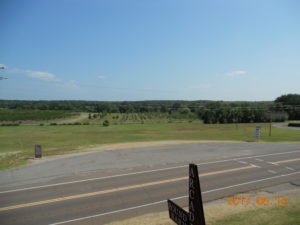 The land in western Oklahoma is flat.  This view is from the hayloft in the round barn, looking SW. 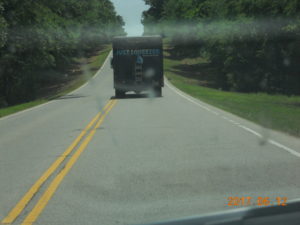 The things you see!  The lettering on the back of this truck reads “Fresh Squeezed” but the cargo is bottled water.  Go figure.

As we drove into Oklahoma City, Mary began searching for her Garmin.  Somehow this little device, the size of a modern I-phone, was lost in the small space of the front seat, cluttered with maps, books, and paper.  It was not to be discovered.  We finally pulled off the road and STILL couldn’t find it.  Then Brian called from Wayland MI about his 1974 MGB ignition light and we discovered the Garmin on top of my ringing cell phone in a cubby in the dash.  We paralleled Route 66 for miles – sometimes it was on the north side, sometimes on the south.  Sometimes it was still in use, sometimes it was dramatically overgrown.   Mary spotted Lucille’s 1941 gasoline station as we passed by Hydro.

The Garmin needs an update.  It would not deliver directions to the Hampton Inn.  This occurred last night, too.  Both of these hotels are very new and apparently opened after Mary’s last update.  We overran Elk City then doubled back, exited, finally found the location on my cell phone, and arrived about 7:30.  Another long day – but what fun!

We passed through several Indian nations and spied numerous casinos.  The car was pushed about by the wind, especially west of Tulsa.  Every tree is bent and waving.  The American flag outside the Hampton is flapping loudly and jangling its cables.  We were buffeted every time we exited the car.  The clerk on the front counter here says it’s always like this – well, sometimes it’s blowing harder.  No wonder some of the 19th century prairie brides quit and returned east!