On our way to breakfast we encountered Sgt Justin Bond and his service dog Boomer.  Bond lost a leg in the Battle of Fallujah in Iraq.  He is heavily involved in a veterans’ aid and relief organization:  www.ourheroesdreams.org.

We left Flagstaff anticipating about a 400 mile run, one of the longest on this trip to California.  We quickly quit I-40 at exit 139 onto Historic Route 66.  From there the road runs very straight into Seligman.  One of the MG enthusiasts following this blog suggested we stop there.  It was good advice!  Finally, we found a true tourist destination along Route 66.  We observed about six tour buses, probably stopping there on their way to the Grand Canyon.  The town was alive.  Not only that, I spotted the first MGB on our trip – a highly modified pull handle MGB.

From Seligman we ran through endless lands, sparsely dotted with scrub.   Route 66 is lightly travelled.  We encountered only about one car per minute.   The roadway is fenced, but only rarely did we see a lonely steer foraging in the browned weeds.  Houses, or more likely ranches, were very few and very far between.  There were occasional, modern Burma Shave signs along the fence lines. Here is one we particularly enjoyed:

In the distance were hundred-car trains passing along the flats.  We suddenly came upon the Grand Canyon Caverns.  This was once the second most visited tourist attraction in Arizona!  In the late morning, there were only a dozen cars or so parked around the grounds and motel.  We didn’t view the caverns.  Perhaps another time.

We continued to follow Route 66 into Kingman and lunched at Mr D’z Route 66 Diner.  THIS was the perfect nostalgia diner experience of our trip!  Two cheeseburgers, drinks, and onion rings tallied $29.00, including the tip.  Expensive, certainly, but worth the experience. 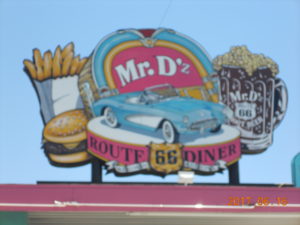 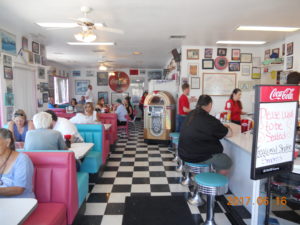 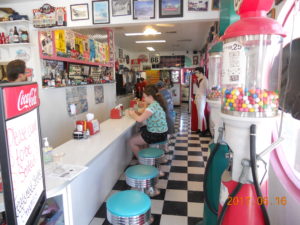 We followed the road out of town only to find we were on our way to Las Vegas.  Route 66 is not always well marked.  We made our way back to I-40 west and immediately exited onto Arizona 10, Oatman Road, Historic Route 66.  This was an adventure!

Vaughn Wasom, also a blog follower, encouraged me to visit Oatman.  It is on the west side of the Black Mountains, and to get there one must crest Sitgreaves Pass, at an elevation of 3,586 feet.  The desert floor looked to be 2000 feet below us.  On this mountain road, Route 66 is about one lane wide, with a painted center line.  We encountered only seven vehicles, two wanting to drive more quickly than I.  As soon as possible I pulled over to let them pass.  Coming towards us was a very large camper van.  OMG!  There are few guard rails and the drops are precipitous.  We wanted to warn them!

The acrophobia I encountered at the Round Barn several days ago was but a whit compared to the near panic I felt ascending the east side of the mountains.  Mr Wasom’s name was included in epithets as I neared panic.  This is not a journey for the faint at heart.   Nor is it an expedition on which one can be inattentive!  Mary would exclaim,”Look at that!” as the landscape swept out for a hundred miles.  I was looking at the center line.  We did stop at the pinnacle of the pass to view the terrain stretched out before us.  Mary, on the other hand, enjoyed every moment of this scary ascent.  She even generously offered multiple times to take over the driving.  I couldn’t bring myself to concede that my female companion was more courageous than I.

As we descended, we eventually came upon Oatman, a western village unequalled in my experience.  As a lanky cowboy strode up the street, spurs jingling, loose burrows wandered the village street seeking fodder offered up by the tourists.  I would never have hazarded upon this incredible sight had it not been for Vaughn’s insistence that we make the trip.

The landscape was rife with flowering cacti.  Later we learned that touching these plants was a horror.  I was amazed that the palm trees we saw later looked almost the same but taller.

From Oatman, Historic Route 66 winds to Golden Shores.  Golden Shores?  There wasn’t a drop of water for miles and the temperature was 110F.  Then we spied Goose Lake and the Colorado River, replete with motor craft and fishing boats.  Here we re-entered I-40. 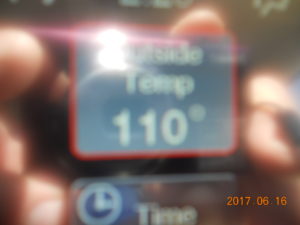 The temperature never wavered more than five degrees.  It finally showed 111F although the three men in the California visitor center told us it was 115F.  Perhaps the Dodge’s thermometer maxes out at 111?

The visitor center was at Needles, home of Charles Schultz of Peanut’s fame.  Then it was onto Barstow, home of the Fort Irwin National Training Center where my son James trained in September, 2011, prior to his deployment to Afghanistan.   Dinner tonight was takeout from Subway which we enjoyed in the clean and quiet of the hotel breakfast section.