On our way to the tech seminar in Solvang, Saturday, 6/17

To the NAMGAR GT-42 also in Solvang

And to the NAMGBR MG2017 meet in San Diego

Thus begins my blog for this summer’s MG events:

We left Grand Rapids, Michigan, this morning about 11:00 am in the Dodge Journey, rented from Enterprise at the Grand Rapids Airport, at 45321 miles.  We trust that today’s driving has aired out the cigarette stink or inured us to the odor.  Arrived in Rolla, Missouri, this evening about 9:00 pm, at 45893 miles.  That’s 572 miles in about 11 hours (we started on EST, spending the night on CST)

Took I-196 from Grand Rapids to Benton Harbor, then I-94 to I-80.  Used the EZ Pass for the FIRST TIME as we whisked along I-80 past Joliet to I-55 south.  Armed with Jerry McClanahan’s EZ66 Guide for Travelers, we left I-55 and picked up the original Route 66 in Wilmington, Illinois, where we immediately spied the “Gemini Giant.”   At Braceville we were stopped for ten minutes while some 100 tractors of all kinds crossed the road in front of us.  The deputy let us continue, but as I looked east, there were another 100 tractors coming toward the same intersection.  Old men, young men, women – What a sight! 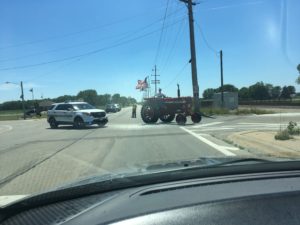 In Odell we saw the restored Standard Station and in Pontiac we viewed an incredibly beautiful courthouse.  For miles we paralleled the crumbling and weed infested southbound lanes of the now abandoned Route 66.  We missed the Bunyan Giant in Atlanta but stopped at the Octagon Library, perfectly suited for each of us.  Mary is a librarian; I am an octogenarian (oops – octophile).   We climbed back onto I-55 and headed for St Louis. 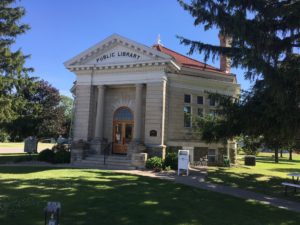 We were so excited about viewing the “Gateway to the West” arch that we missed our turn for I-44 but were able to ease back onto it within minutes.  From I-64 I could just see the tower of the St Louis train station, the only building it St Louis worth saving, according to Frank Lloyd Wright.  It was still another hundred miles to our first evening’s night away from home.  That gave us another hour and a half to solve the world’s problems.  The fellow on the front desk at the Hampton Inn here in Rolla is a nuclear engineering student. 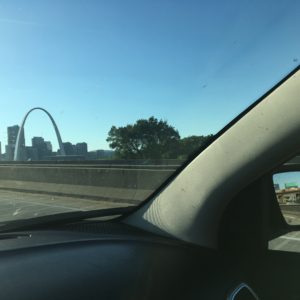 I only took one technical call today while on the road.  It was from Henri Dopierala of Northport, NY, who traded a running British Motorcycle for a 1950 TD (pictured).  Henri told me of his time working for the UN in Egypt (source of the British motorcycles he restores), Syria, Gaza Strip, Central African Republic, and other fascinating locales.  He ended up with an XPEG engine along with the original XPAG with the trade.  There’s a lot of work on that trailer! 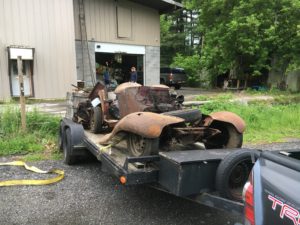 I will present another Tech Seminar preceding the Hunt Country Classic in Washington, DC, October 7th, Saurday, sponsored by the Washington DC MGCC.

AND!!  Perhaps another next winter in Tallahassee FL — stay tuned.