Leaving Rolla, MO, this morning proved especially difficult.  First was the hour-long phone conversation with the reservations people at a hotel I had booked for next week.  They’d already run my card and told me that cancellation was prohibited – or that I’d suffer a penalty equal to the length of my stay.   They were adamant that they WERE the hotel but it sounded like a bunch of third party malarkey to me.  Several years ago I’d booked a flight with Captain Kirk on Priceline.  The flight was cancelled because of a snowstorm.  Neither Priceline nor the airline would refund the ticket amount EVEN THOUGH I’d purchased “flight insurance.”  I swore I’d never use a third party again.  But something’s going on here that will take another morning to sort out.  The young man on the phone was named Riley.  He’d never heard of the Nuffield automobile by that name.

Then it was off to get gasoline.  The pump wouldn’t accept my card and displayed “See Cashier.”  There were about a dozen people in line so I went to the station across the street.  I got out, went to insert the card but was stymied as a printed paper across the pump read “Not Accepting Credit or Debit Cards.”  So I backed up to another pump which gladly accepted my card but delivered the gasoline at about the same rate as an SU fuel pump.  It took about five minutes to dispense 14 gallons.  But, then, finally, we were on our way!

I-44 parallels the original Route 66, sometimes as closely as fifty yards.  I found it fascinating that while Illinois and Oklahoma line the interstates with fencing, Missouri does not.  One twitch of the steering wheel and those 18 wheelers would be in my lane!  We passed through Hooker’s Cut 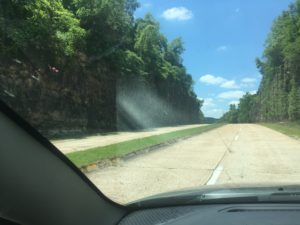 and then past the Devil’s elbow in Hooker where we hazarded upon a score of motorcycles parked along a bridge, no doubt following Route 66 as we were.  In St Robert we encountered the Uranus Fudge Shop.  No doubt it was thusly named before the pronunciation police shifted emphasis of the seventh planet’s name to the first syllable.  The mental image was too much — we didn’t stop.  For all the comments in the tourist books about the great numbers of sightseers along the route, we found it very lightly travelled.

We passed Fort Leonard Wood and through a bevy of small towns.  Mary toggled between a tourist map, two tourist books, and some printed instructions I found online.  We were usually able to keep on the route but among some poorly written instructions and a lack of signage we made several wrong turns. 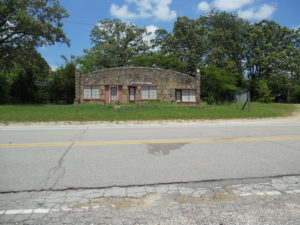 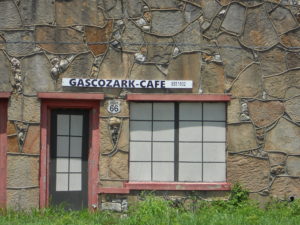 Gascozark was not the picture of a flourishing municipality. 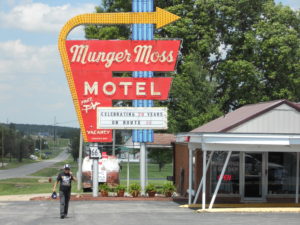 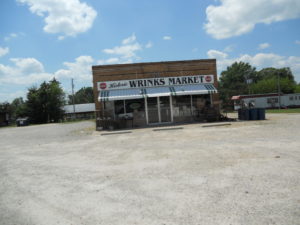 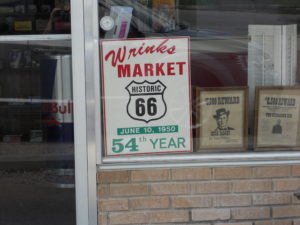 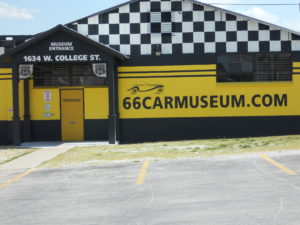 The Route 66 Car Museum in Springfield was closed, as it was a Sunday. 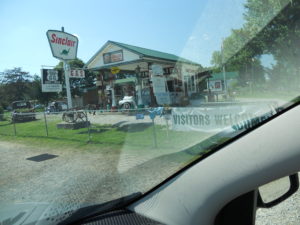 The Sinclair Gasoline Station in Paris Springs Junction was a hoot. 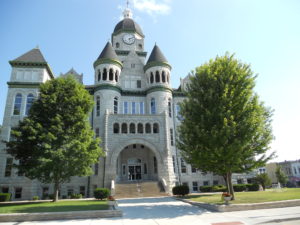 I was hindered from taking a full face-on picture of the beautifully restored courthouse in Carthage by a young woman in a halter top spray painting the rear bumper of her car.  Still, I was able to get some good views.

Dropped down I-49 from Carthage to I-44 and headed towards Claremore OK at expressway speed.  As such, we missed the Kansas, Missouri, and Oklahoma Tri-State marker by 800 feet.

Took a tech call from John Giannasca, co-founder of the American MGB Association, about an overdrive gearbox.